These Monster Cookies have a marshmallow fluff base instead of peanut butter, and are jam packed with candies. A soft and chewy cookie with a crispy bite.

Love this recipe? Sign up for Sweet 2 Eat Baking’s email subscription and never miss out again!

Don’t you just hate it when you’re gearing up to make/bake something and you know that you have the ingredients in. Then comes the time where you put your thoughts and efforts into action only to find that 1 or more of the ingredients you knew you had in.. well, isn’t in!

I knew for a fact we had crunchy peanut butter in. Not only 1, but I knew there were 2 jars of it. The giant man-baby doesn’t like PB so I’m guessing it met its death by him. I also knew I replenished the bicarbonate of soda (baking soda) too. And I knew that when I last ran out of it, that I went a little crazy and bought something stupid like 5 packages of the stuff. Know, know, KNOW!!!

So, where the devil are they? By this point I had already mixed half of the ingredients together and the oven was preheated – there was no backing out now! Bicarb of soda is pretty darn important in this cookie recipe, but it was already 11pm and I was in my PJ’s (and apron, sexy!), so I was going to substitute for baking powder. That was nowhere to be seen neither. Gah! I had to use self-raising flour since all that contains is plain/all purpose flour with baking power added.

As for the peanut butter, what could I substitute that for? I opened my pantry cupboard and there it was staring right back at me. The little Devil voice in my head was saying “Ooo, pick me.. pick me”. The Marshmallow Fluff was the answer to those prayers! And ¾ of the entire jar. Oh, yes!

So these bad boys are just that. I wrongly described them on Twitter as ‘heavenly’, but devilish is more appropriate with all those different candies in these puppies…

Badddddd! You ought to have seen the caramel leaking out and bubbling from the cookies as they were baking. I couldn’t wait the whole 12 minutes they took to cook.

Over all, they’re deliciously sweet and have a wonderful chewy inner with a slightly crispy outer. And everyone in my house is raving how yummy they are. My kids don’t even like oatmeal!

I’ve included my recipe below for these exact cookies. For the candy, I have called for ¾ of a cup but being honest, I eyeballed all of the candy used. Most of the candies I used were in small 113-200g bags and used all from the bags.

If you give these a try, do let me know if you like them.

HOWDY! I’m Lisa, a sugar fueled baker and lover of all things sweet! I love to create [from scratch] dessert recipes. Desserts make me happy, ‘rainbows and unicorns’ kind of happy! Read More »

NEVER MISS A RECIPE! Subscribe to get new posts via email and a FREE eBook of my top 10 recipes:

Subscribe to get new posts and recipe updates via email. Plus, a FREE eBook of my top 10 recipes: 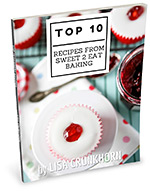 Plus, a FREE copy of my Top 10 Dessert Recipes From Sweet 2 Eat Baking eBook, as a thank you.

You're almost there! Check your email and click the confirmation link to finish the process.